The decades prior to 2000 witnessed the accelerating concentration of media in this country. That means more and more newspapers; radio and TV stations came under the ownership of fewer and fewer people. The implications of this trend for a democracy are scary. As a reaction to this development, Congress passed legislation in the year 2000 creating a possible one thousand low-powered radio stations. Three individuals in Valparaiso began collaborating to apply for an FCC license to create WVLP under the ownership of Project Neighbors, a local not-for-profit. All LPFM’s could only be owned by not-for-profit organizations. The application was sent in August, 2000.

On a rainy afternoon in June of 2001 we received word from the FCC that we were awarded our radio permit. WVLP was born!

A group of about 25 community activists and radio visionaries organized what is now known as Neighbors Broadcasting. Our building permit allowed 18 months to get on the air. This group raised money, planned shows, educated themselves in technical matters and ordered a broadcast tower and equipment. In early October, 2002, the tower was raised by volunteers atop Front Porch Music at 505 Lincolnway. At about 6:00 pm on October 10th, WVLP began broadcasting a clear, independent signal to all of Valpo and the surrounding area. There was no studio at this point. All broadcasts consisted of recorded music generated by a computer located at Front Porch Music.

When WVLP started there was NO STUDIO.  We literally had to run over to to Front Porch Music to get our first recorded shows on the air!

The first two hosted shows were The Uncle Jerry Show and Pickin’ on the Porch followed shortly by Conversations. These shows were pre-recorded and carried by hand to the computer at The Porch and then broadcast.

Early in 2003, WVLP began broadcasting from its original one room studio off the alley at 256 West Indiana Ave. A broadcast quality phone line was established between the studio and the transmitter at Front Porch Music. WVLP began live broadcasts. Among the first shows were The Waz Show, Greg’s Garage and The Fishin’ Musicians. In January of 2006, WVLP moved to its current location in the lower level of 256 Indiana.

WVLP has broadcast continuously from October 2002 until today: 24 hours a day and seven days per week. We offer many locally produced shows, our unique mix of music and several shows “imported” to our studio such as Democracy Now, The Thomas Jefferson Hour and others. 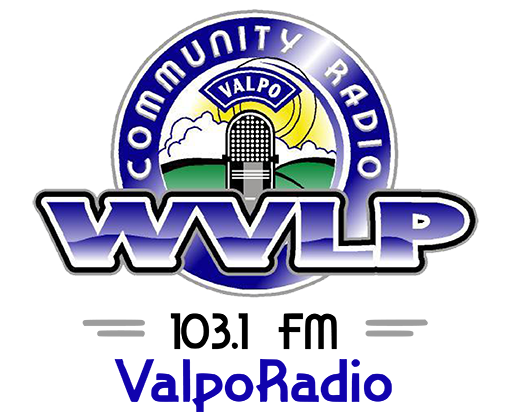 Every day, WVLP 103.1 FM features folks from around Valparaiso, Indiana, playing music they love and discussing issues that matter.  On air 24 hours a day, we feature music and local programming you won’t hear anywhere else.

Listen live at 103.1 FM or click the LISTEN or POPUP buttons in the upper right  of our website to stream WVLP any where in the world. 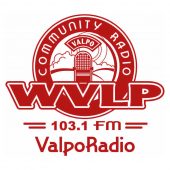